I have recently faced a peculiar error with my Jenkins+Selenium Integration.The scripts which were running fine for many weeks suddenly started failing.The scripts would not even get invoked.

Initially before invocation of the scripts I got a failed to parse POM error. How could that happen when I have’nt changed the setup at all myself??

This was the error I saw in the Jenkins console logs :-

Anyhow after reading a few Stack overflow posts, I got a few clues that it must be somewhere related to the default Maven installations done by Jenkins in the respective slaves.

In the Jenkins slave default path I saw there are few jars/ packages that Jenkins configures/copied on to the slave :- 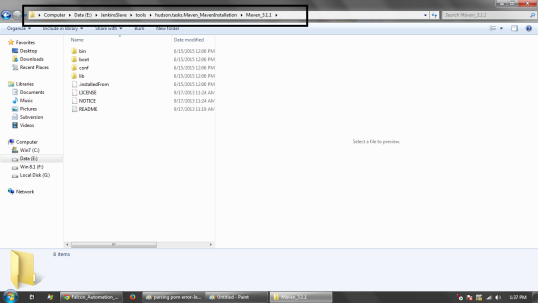 I deleted the 3 jars(maven3-interceptor-commons.jar, maven31-agent.jar, maven31-interceptor.jar) and the complete ‘tools’ folder and once again re-run my automation job.

And… Voila!! The scripts were invoked fine once again! 🙂 All those files were again copied fresh to the Jenkins Slave once again.

So it looks like maybe one of the Maven jars got corrupted for some reason and were breaking the execution. The reason this could have happened is still hazy to me. But atleast we have a solution for it :).

Let me know if you come across such an error and if you were able to resolve it with this post.